Suzanne Romness: Focus on the Journey

It’s easy to believe that SyteraYoga teacher Suzanne Romness was a gifted athlete as a child. She talks with her body, demonstrating poses and moving around the classroom so that she is physically close to her students, squatting to meet with them on their mats in their down dogs. But being a gifted athlete can have disadvantages.

Suzanne grew up running on the beach across the street from her childhood home in Playa del Rey, a Los Angeles oceanside community nestled on dunes just south of LAX. She was swimming in the ocean at the age of five. She spent her days playing volleyball, tennis, basketball, and ultimate frisbee. In high school, she became serious about tennis and was recruited to play Division I at Loyola Marymount University.

Then, during her sophomore year, her shoulder gave out. She knew something might have been wrong, but she pushed herself to compete anyway, repeating movements over and over. Ultimately, she was warming up for a match when she realized she couldn’t get her arm up over her shoulder to serve. The deltoid muscles were shredded as a result of overuse. She never played college-level tennis again; it was a career-ender. She had always imagined she would be a professional tennis player or a coach, but she had to readjust her outlook. 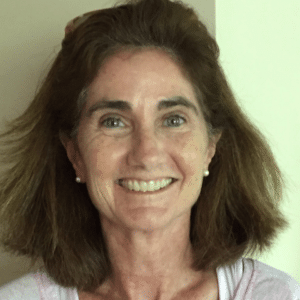 Today, Suzanne looks back on that experience with the knowledge that years of teaching yoga can bring: “It’s easy to live in an unbalanced way. The body seeks balance, yet the mind often won’t settle. We can get used to living in a rushed and unhealthy way.”

After her injury, Suzanne transferred to U.C. Santa Barbara and refocused on her political science major, eventually moving to the D.C. area for a job with the Senate Armed Services Committee. Still very active with running, she decided to go back to graduate school at American University in health fitness management. She ran fitness centers, including at the Army Materiel Command and at a Washington, D.C. law firm where she taught aerobics, nutrition, stretch-and-strengthen classes, and squash.

Her life was very active and “full of motion,” she says. So, when her mother-in-law invited her to Rancho la Puerta Wellness Spa in the mountains of Tacate, Mexico, she couldn’t wait to go. For the first time in her life, she began to really focus on yoga.

The well-known resort features vegetarian food, hikes, pools, guest speakers, and fitness classes every hour throughout the day. She began each day hiking 4-5 miles up the mountains, followed by yoga, Pilates, and cardio classes.  It was the first time she’d taken a yoga class and just loved it. She remembers the yoga teacher guiding the class in a breathing exercise, and realized it was the first time she was mindful of her breath while exercising.  Right then she knew yoga was something she needed and wanted in her life. After the retreat, she started doing yoga regularly. “I had always done cardio sports, running, swimming, biking, and tennis, and I realized yoga would provide me with much-needed balance in my life.” At the age of 40, Suzanne added yoga to her life and since then has felt more balance, calm, and accepting of herself and others.

Now Suzanne has four children: two older kids, who are 30 and 27, and then two younger children, who are 17 and 15. Her older daughter followed in her footsteps, playing college-level soccer at the University of South Carolina.

Along with teaching yoga to adults and children, Suzanne is a certified personal trainer. She admires the gentle, happy-go-lucky style of California-based yoga guru, Erich Schiffmann, author of Moving Into Stillness. Like Schiffmann, she teaches self-acceptance in her hatha, vinyasa, and restorative classes.

Suzanne’s teaching style varies depending on the class she is teaching and the students in the class. “I believe my students let me know what they need. It’s important to me that each student learns to feel the poses in their body and guide their practice with the breath.” She is a stickler for form and breathwork–yoga is about recognizing when and how to take care of oneself.

After 40 years of running and not stretching, Suzanne has tight hamstrings and still can’t get her heels flat in Down Dog, but she continues to work on it. Yoga is about the journey of guiding the body into poses. “I love that yoga is called a practice. There is always something else to learn and discover about our bodies,” she says.

Meghan Mullan is a Bethesda-based writer and SyteraYoga student.