Everyone has a different reason for beginning yoga. In the case of SyteraYoga teacher Kathy Low, it was a colicky baby. Kathy had taken many styles of yoga since 1998, but it wasn’t until she ended up in an Ashtanga yoga class in 2007 that she began to see the light at the end of the baby tunnel. She found Ashtanga to be a quiet, less complicated and, therefore, more centering yoga practice. At her first class, the room was silent. There was no music or chatter. There was no variation from a set sequence. In other words, there were no distractions. It was just herself, her body, her breath, a teacher, and the practice—the same practice, every single class. There were sun salutations, followed by standing and then seated poses. 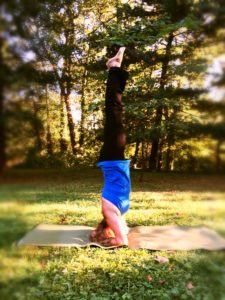 Modern day Ashtanga yoga adheres to the teachings of Sri K. Pattabhi Jois (1915 – 2009), a famous twentieth century Indian teacher. Jois was a student of T. Krishnamacharya (1888 – 1989), who is considered the father of modern yoga. Jois and other well-known teachers (who would later bring yoga to the West like a spark to a dry forest) all studied under T. Krishnamacharya. When asked about his yoga teaching, Jois is credited with saying “never change anything.” Krishnamacharya also said the same thing about his teaching, and that all the techniques and exercises he taught came from an ancient book known as the Yoga Korunta. With deep respect, Ashtanga adheres to a traditional form of yoga passed along for several thousand years from teacher to teacher. Less change is what Kathy was looking for. Among the chaotic, unpredictable diaper changing and all-night crying, she could return to her mat where she found a steady system of counts, breathing, and familiar poses. The changelessness was comforting, like waves in the ocean. Interestingly, SyteraYoga teacher, John Sherburne, also began yoga when he had an infant at home. He needed to get out of the house. Coming from a Tai Chi background (a martial art focusing on repeated movements), Ashtanga was familiar. And it worked with his interest in meditation. Ashtanga in the West has suffered from a bad rap for being overly dogmatic and physically demanding, like a yoga boot camp. In fact, a Google search with the words “Ashtanga is” will offer the third word “hard.” As a result, John says, some people often come to Ashtanga with a competitive mindset or they avoid it all together. For those in the “I will conquer” group, many who are athletes, they will be confronted with their egos, he says. But eventually, Ashtanga will offer those students an opportunity to let go of achievement-based yoga and begin to practice presence-based yoga instead.

For those who might shy away from the practice, there are endless ways to modify poses. There are going to be poses you cannot do, but you do what you can and that’s what matters. “No one is telling you that you have to do all of the sun salutations or grab your toes. You can have bent knees or do whatever you need to do,” John explains. Underlying Krishnamacharya’s teachings, was the principle, “teach what is appropriate for an individual.” In fact, people practice Ashtanga in wheelchairs or with amputations. A YouTube search under “Ashtanga amputees” shows videos of the primary series done from the floor. Kathy broke her foot five years ago and practiced this way for six months. Furthermore, it is important that students understand that Ashtanga is a moving meditation and a breathing practice, Kathy explains. Just by learning to do the ujjayi breathing – a sounded breath made by restricting the flow of air in the back of the throat – you’re succeeding. “That breath piece is so super calming. It is how your body self-soothes. You can go through a [difficult] day, get on your mat and then you can breathe.” Both teachers stress that, for beginners, it’s important they don’t try just one class. It isn’t until the second, third, fourth, and or maybe the fifth class that the student begins to come into the practice, according to John. He believes that the body and mind are only able to strengthen, open, and untangle with time. When hit with a limitation—either physical or mental—it is important to push through it. He encourages students not to shy away from the resistance they may feel in practice. It’s just like life; there are good times and difficult times. Dealing with challenges in yoga is an excellent practice for dealing with challenges in life. 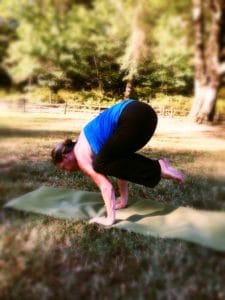 Although an Ashtanga class may look like simply poses, students are actually learning on so many different levels, says John. “You are learning where you are tight in your body, how certain poses affect other poses. How your body is structured, what is tight and what is not tight.” And, most importantly, you are learning about your mental tendencies. In class, Kathy counts in Sanskrit. Her voice is slow, deep, and methodical. As one of Kathy’s Ashtanga students, I’m floating a bit and breathing deeper by osmosis. I am practicing the same sequence of poses that I’ve done before—no variations, unchanging. It’s only the practice and me, the practitioner. The practice is always the same but I’m not. My mind is taking off like a kite in bad weather. But, the practice isn’t; it’s still there, rhythmical and reliable. And when I’m ready I can pull on the string and come back. Meghan Mullan is a freelance writer and SyteraYoga student