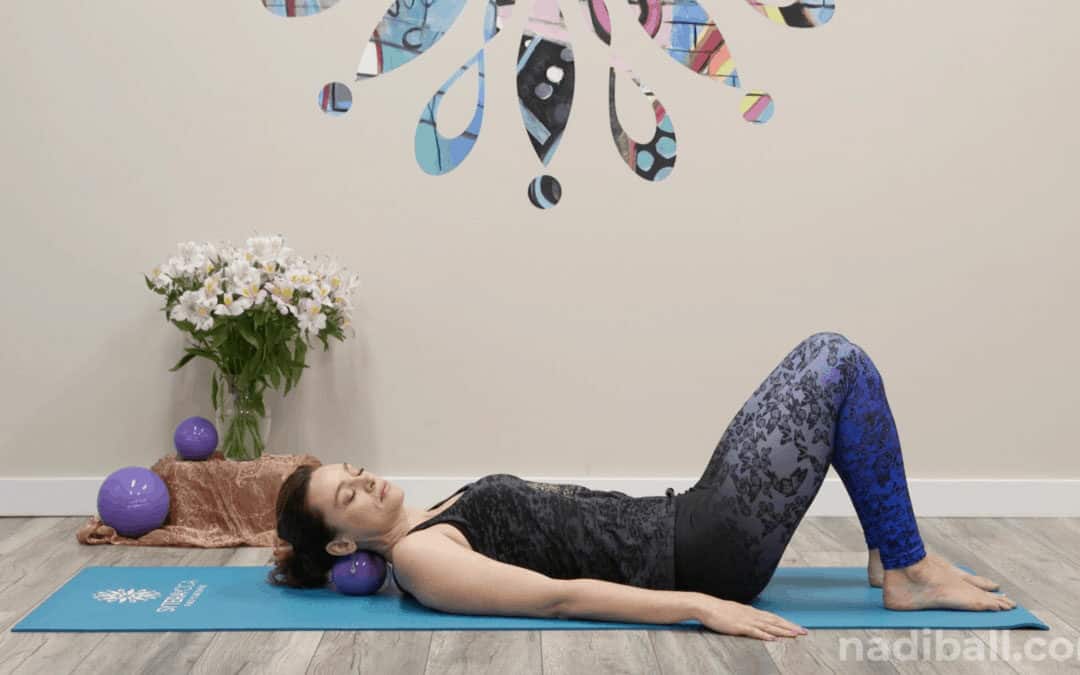 Use the small Nadi Ball to release tension in the head and neck. 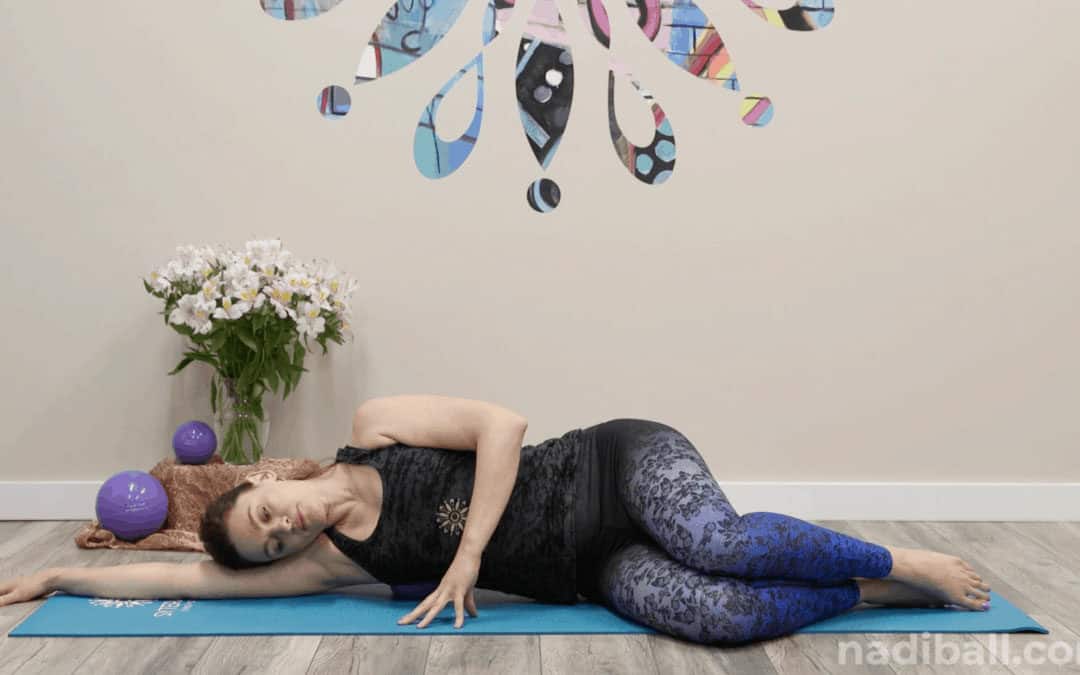 We use the small Nadi Ball to release tension underneath the shoulder blade. 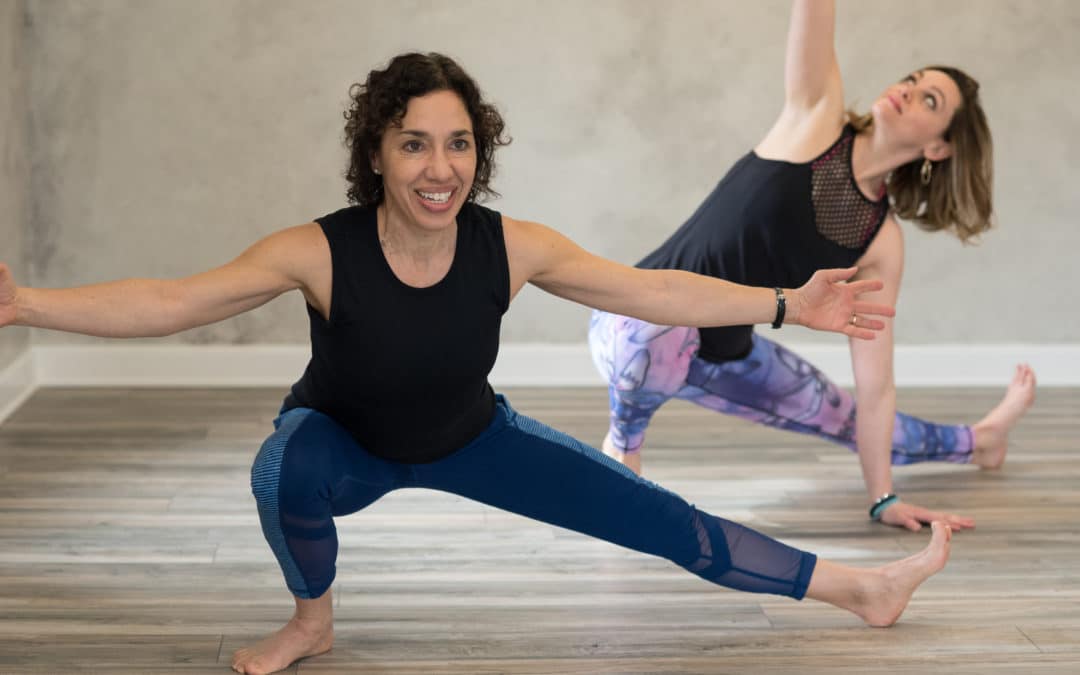 Yvette Carlucci believes in finding out what it’s like to give it your all on the yoga mat. As a child, she watched her mother shy away from physical activity, so Yvette committed to leading a more physical life. In high school she joined the track team, and it cemented her outlook. She would go on to run the Boston marathon and later swap a desk job as a bank branch manager for teaching yoga.

Now a trim and toned mother of two and full-time yoga teacher, Yvette considers physical activity to be fundamental to who she is. Running, which began as a way to manage the stressors of high school, became a passion. Yoga, which she first took up as a way to loosen up tight muscles, became a second career.

Her vinyasa classes, which can be considered down-right vigorous by some, often include arm balances! She encourages students to experiment with the space beyond where they think their edge is. “I’m trying to teach self-empowerment, self-reliance. We are stronger than we know, and we figure that out on the yoga mat so we can use that strength in our lives.” 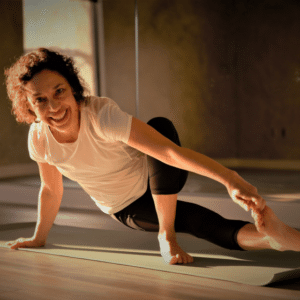 After attending a yoga retreat in Costa Rica in 2000, Yvette, an MBA, felt she had to know more about yoga. “I began to realize that yoga was affecting me mentally, and I wanted to understand more.” She took her 200-hour training followed later by 500-hour advanced teacher training. She has studied with nationally-known yoga teachers Jason Crandell and Max Strom, and credits local instructors, including Sytera, as inspirations. She’s studied Yin, injury prevention, prenatal, and physio stride gait. And she is fascinated by ancient Hindu yoga texts

Beyond the formal training, she’s been blown away by what her students have taught her, she says. By being part of the SyteraYoga community she has built relationships with students who honor her by sharing what they are dealing with off the mat — deaths, illnesses, grief, and more.  “It’s totally humbling to me that they can share that much (with me),” she says. “I’m a private person. So, this is such a gift that they are that open and that willing.”

Yvette doesn’t realize it, but she has a gift for making others feel safe to explore, says longtime student Martha Blue. Yvette is uncommonly patient, kind, and thoughtful. “Yvette makes sure no one feels like an outsider,” says Martha, who lost her husband nine years ago and suffered from back pain after a couple of car accidents. She credits Yvette with healing her back.

When students come to class with burdens, Yvette might offer a yoga sequence to encourage stress reduction with poses that are more grounding, to let students find firm footing and know they are safe. Or, in line with her personality, she might suggest that they “rock this practice” and “get out of their heads.” It’s important that students listen to themselves and their “teacher within” way more than they should listen to her, says Yvette. By doing so, her students discover strength and confidence beyond what they believed was possible. 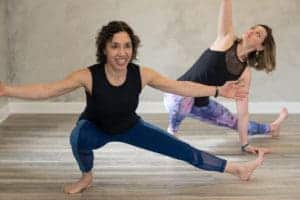 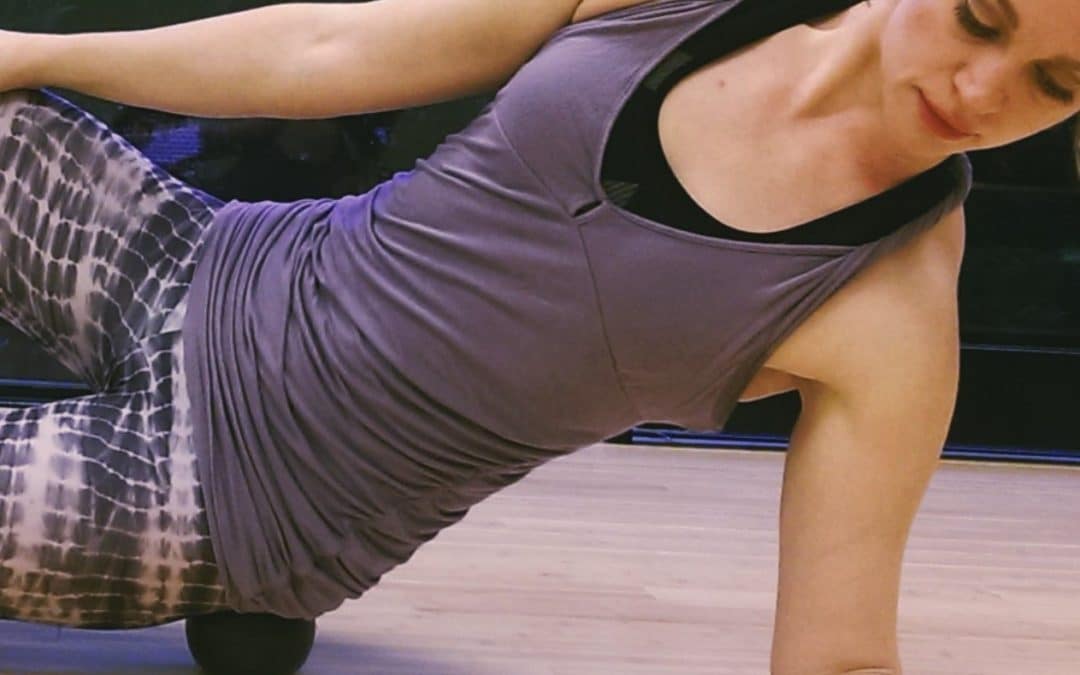 Loosen Up with Yoga Body Rolling

A set of body rolling balls arrived on our doorstep and my husband freaked out. At the gym he has rolled a lacrosse ball across his back and shoulders to loosen the muscles. So, the prospect of fixing the “issues in his tissues” with a new type of rolling sphere was super appealing. A lot of people feel the same way. Body rolling is becoming increasingly popular in gyms and studios across the country. But what exactly is it? Body rolling was first popularized in 1979 by a yoga teacher and bodyworker in Manhattan who was interested in healing herself after a hip injury. She believed that we are all walking around with a lot of muscle imbalance from chronic stress and old injuries (think laptop hunch, driving slouch, clenched back, etc.). By rolling out the muscles and tissues with a ball, a person could use knowledge of one’s own injuries and aches to reprogram stuck, unhealthy patterns in the body and restore a sense of balance. The idea is to let the flesh, muscle, and tendon sink around the ball, and then work into tight, crunchy knots and muscle fibers. This allows for the fascia—the thin sheath of fibrous tissue around the muscles and organs—to loosen and reshape. Sound good? There’s more! Since the balls are three dimensional, they can target areas that are hard to reach with traditional stretching and foam rolling. The balls massage the tendons, ligaments, bones, and even organs and the nervous system, stimulating blood flow. Pressing the ball into the abdomen and ribs, for example, can affect the large and small intestine, promoting healthy digestion. On top of that, the balls work in and around joints and vertebrae, creating space where there is unhealthy compression. 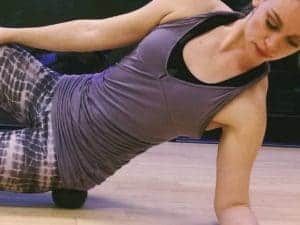 Sytera Field, who started teaching yoga body rolling nine years ago, considers herself a guide. Students have the control over the pressure and intensity of the practice, which is important because there are going to be mental and physical challenges. “You are asking your body to do something different and there is a conflict there,” she says. “There’s a resistance, and you have to decide if you are ready to let go of it. You have to be quiet enough in your mind to decipher the messages that you are getting and whether the sensations are productive or unproductive.” Sytera studied Thai Yoga Massage in her hometown of Austin. She views body rolling as a form of giving oneself a Thai Yoga Massage. Body rolling is incredibly therapeutic because you get the benefits of stretching and massage at the same time. Nici Bush, a SyteraYoga student who travels internationally for her job, body rolls regularly. She tosses a set of balls in her suitcase, and after flights she rolls the balls down her back, over her hamstrings, and into the constrictions in her neck and shoulders. After that, it’s easier to get into her yoga practice, and there is a better connection to the floor in standing poses. There are mental benefits, too. She says she gets that same floating feeling that you experience after receiving a professional massage. At my house, I broke open the package of yoga balls and started rolling. Things started to shift. When I stood up, my legs weren’t tight in the same areas and I felt lighter. My shoulders moved back and there was more room for my belly to rise and fall with my breath. My husband was going to try next, but then the puppy got to them. Did I mention that the balls are rubbery? We will be ordering a new set. For now, my husband has to wait. Meghan Mullan is a freelance writer and SyteraYoga student. 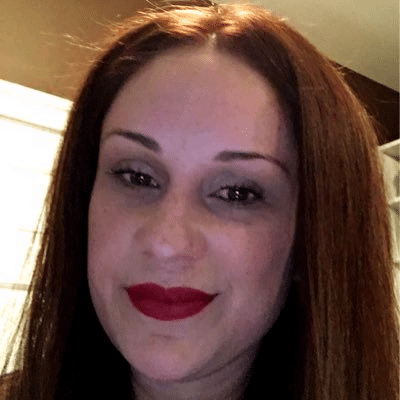